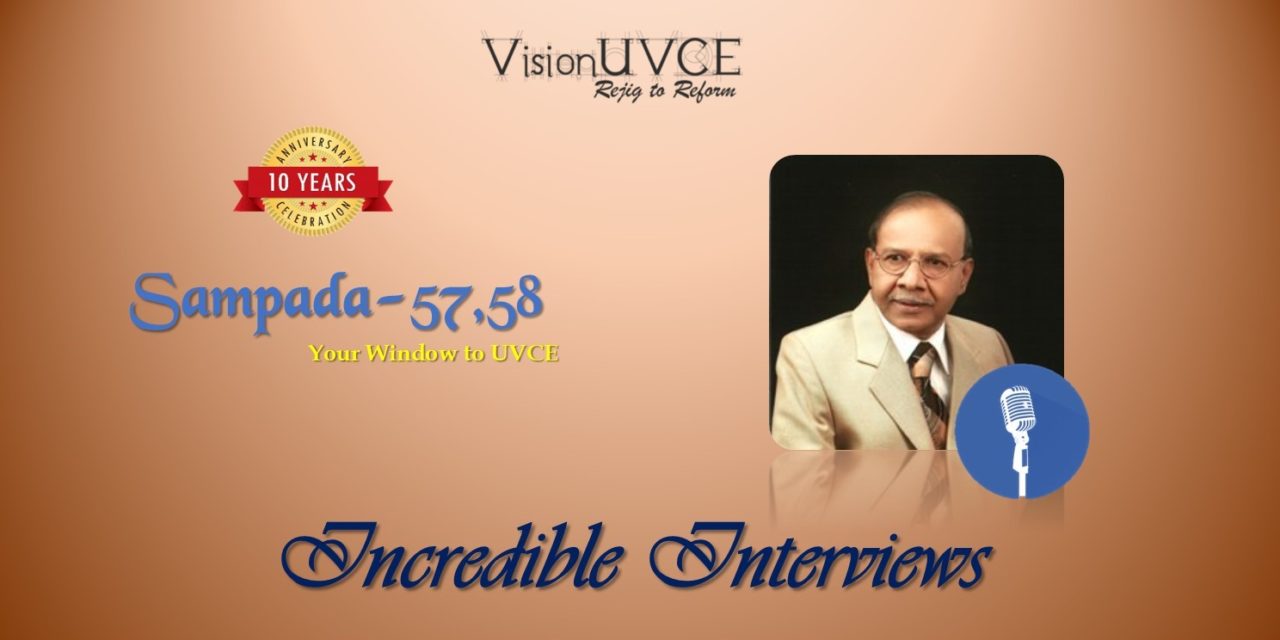 Borrowed from SAMPADA old editions – for the 10th Anniversary Special Issue – Interviews section. This one is of A P Krishnaraj (KIKKA), Batch of 1970 Mechanical (an extract from his complete interview).

Team Sampada: Having spent your four most significant years in UVCE, what according to you are the Do’s and Don’ts you would suggest to the UVCE aspirants?

Krishnaraj: A little correction here, I was the last batch of 5 years integrated course of Engineering and happily spent my time on the UVCE campus along with friends and lecturers in the classes. We had the opportunity to study three branches of Engineering, Mechanical, Civil and Electrical which were common for first three years for all the Engineering students and also practical / lab test in these branches. Only from fourth and final fifth year we branch out to the respective chosen branches.

Here I would like to express my own experience to achieve the success. Basically, UVCE, was a strict and result oriented college with well experienced lecturers who were able to teach the students to understand clearly the subjects. At the same time they were the task masters in assignments of workshops, labs and retrieving the completed records in time. Every alternate day the records to be submitted for the class marks, and if not in time marks will be reduced. For machine drawing, civil drawing classes, there will be two or three four hour sessions. But the lecturers will collect the drawings on each session to control the completion within the prescribed period. If not completed, the marks will be less and also there will be instruction to resubmit after completing at home to enhance one or two marks.

That way UVCE had its standards to discipline the students. If we miss an assignment to submit in time, there will be enormous pressure on us to cope with time. So it is very clear that once we enter engineering, we have to use the time judiciously to complete the exams successfully with good marks.

Now coming to the Do’s and Don’ts:

Ultimately, it is said that pure success is based by 3 rules- first, hard work; second very hard work and third very very hard work. Once the mind decides, it is not very difficult to achieve the success in life.

Team Sampada: How do you think UVCE has changed ever since you graduated?

APK: Frankly, I should confess that after graduating from UVCE in Mechanical Engineering, I dipped deeply into my career planning, career building serving the organizations with sincere efforts. In the process, my connection with my Alma Mater diminished and I lost touch. But once in a way I would come across UVCE’s information through newspapers.

But now after getting connected with Sampada, I could update too much even more on the great evolution of UVCE right from the initial stage from 1917. Though I wrote about Sir. M. Visveswaraya in the Golden Jubilee magazine of 1967-68, even this much information I didn’t have at that time.

Engineering education has taken up lot of changes with many many branches of today when I left the college during 1969-70, there was only five branches in UVCE, Mechanical, Civil, Electrical and the two new, Architecture and Computers. If we properly analyze, Engineering involvement is the main factor for human sustenance; whether it is, survival of human race, environment, for human needs of changing phases, Research and development for any field, space exploring, to avoid space calamities, threats to our globe, even in the medical field to support them.

With UVCE’s who had established the best system in running an Engineering college right form British era will continue its journey churning out very talented, well performing committed engineers to the World.

Team Sampada: How different would have your life been if you weren’t in UVCE?

APK: Right from young age, I was encouraged / determined to become an Engineer. At the most I would have got admitted in to some other Engineering college. At that time, RV and BMS Engineer colleges were there in Bangalore apart from Ramaiah College which started at the beginning of 1960’s. Ramaiah College offered seats to students who can offer Rs.5000/- as donation.

Because of the status of UVCE, evolving itself in to a giant technical Institution, since 1917 and definitely it had its pioneering emblem from British times. Lot of Stalwarts/Eminent personalities, toiled too much in their administration, time and again, in upholding the high standards to bringing out best Engineers. UVCE was rated as number-1 College in Bangalore.

With all these, getting into UVCE was giving a proud and prestigious feeling, because we are sure of coming out as good Engineers. I was very lucky to get selected there. Another important advantage is, Experienced Engineers from PWD and Electricity board were deputed to UVCE for teaching the students. Because of their practical experience, the teachings will have its own effectiveness on the students.

UVCE also allowed me to take part in some extracurricular activities like; I was selected as Tour-Secretary for two projects, to lead the students out of Bangalore, one was South-India Education tour and the other was the Project tour to many Dam sites; I was allowed to write about Sir M. Visvesvaraya, in the Golden Jubilee Special Magazine in 1967-68; to draw the sketches of the technical write ups in the Magazine; finally honored me by displaying my photograph and a miniature art of mine in the same Magazine. Also, Principal allowed me to display the tour programs in the sketch form, on the notice board along with the photographs of the tour, after returning. So, by chance, if I were to join some other college other than UVCE, I don’t think, I would have had such an encouragement and rich quality education.

Ultimately, in a nutshell, my best gain that UVCE imbibed in me is the most important trait, the Leadership quality which always, lingered in me throughout my service in different organizations to give sincere service, following the organizations Goals/Values and to guide/develop young Engineers in right directions. Even today, wherever I am, I feel I am the leader.

Team Sampada: What according to you is that one think that distinguishes UVCE from other colleges?

APK: Mainly UVCE is the oldest college in Karnataka state from the British era. The scholarly generations of that period was seriously concerned with people’s development, especially, with the younger generation and their education. There was no political game among ourselves but maybe it was there, against the British rulers. The eminent, dedicated and well educated leaders who nurtured, UVCE right from its beginning were trying their best to establish an apt teaching / practical system to develop the Engineering students to emerge out as distinguished and talented Engineers.

Because of its strong foundations of establishment in the Academic career, its systems will never deteriorate and all along the successors worked hard to maintain and improve it. This helped in bringing the college to its higher status among other colleges, at present.

Also it is a very painful situation to note that the Engineering colleges are treated like money spinners and most of the owners are corrupt politicians. We can easily imagine such colleges will not have sincere commitment to the students in parting out the quality education.

Team Sampada: How important is it for the Alumni to return to the Alma Mater to contribute to making it a better place?

APK: Each UVCE student after completion had gone on their career in different direction, in different institutions / industries not only in India but also abroad, and in the process forgot about the Alma-Mater but can’t blame them.

But once they settled in life and their career, when they reached their superannuation with enormous experience and if they think of the Alma-mater which gave their foundation to successful career life, needs to return as an Alumni and get enrolled. By this both the Alumni and Alma mater will get benefited.

The Alumni can participate, & expose their own rich experience to other members as well as the younger generations. In turn Alma-mater can be busy with programmes and other events to bring the Alumni together. When showing our experience with others it is really an enjoyable and proud moment for the Alumni.

Tracking the Alumni by the Alumni association is also very important and luckily we have the media, FB, Twitter, email, etc. which will be a very big boon. Most of the people on their own won’t show interest, but once the activities are enlightened definitely they will participate.

To meet old colleagues, knowing about the Alumni by one and all will be a great pleasure and belonging to the Alma mater. 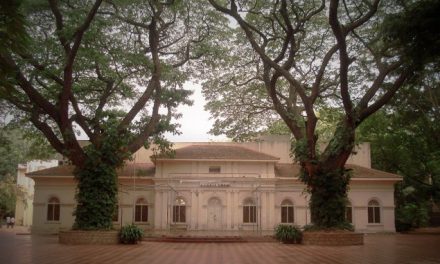 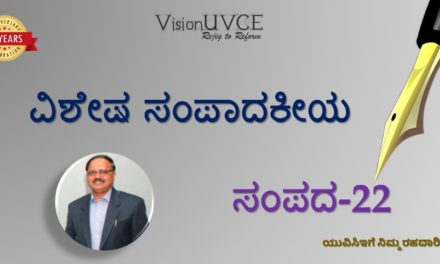 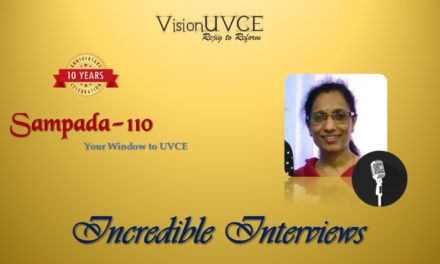